Alan Ayckbourn’s celebrated trilogy The Norman Conquests: three hilarious and poignant plays depicting the same six characters in one house over one weekend, focusing on Norman and his romantic follies.

Table Manners: England’s famous seducer of other men’s wives lays siege to his sister-in-law in the first “battle.” A middle-class family trying to have a pleasant country weekend is no match for Norman, who horrifies everyone by doing exactly as he likes. Recorded before a live audience at the Guest Quarters Suite Hotel, Santa Monica in April of 1995.

Living Together: In the second “battle” Norman gets drunk on homemade wine—and all hell breaks loose. He unleashes his merry brand of manipulative charm on the hapless guests and even his most formidable opponents go down in defeat on the drawing room rug. Recorded before a live audience at the DoubleTree Suites, Santa Monica in April of 1996.

Round and Round the Garden: In the third “battle” the setting is Mother’s overgrown English garden, where something more troublesome than brambles lurks among the roses. Havoc ensues as this satirical masterpiece makes its way to a hilarious conclusion. Recorded before a live audience at the DoubleTree Suites, Santa Monica in April of 1997. 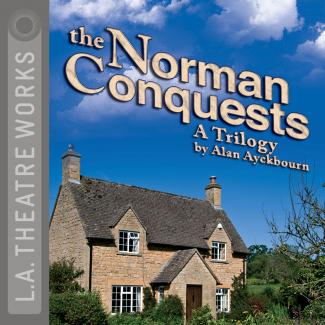