It is with great sadness that LATW acknowledges the passing of Tony Award®-winning playwright Terrence McNally.

We encourage you to listen to the following NPR Fresh Air interview with Terrence McNally, and as a tribute, we are now streaming our recording of his hit play Lips Together, Teeth Apart.

Scroll down to listen for free through April 30th. 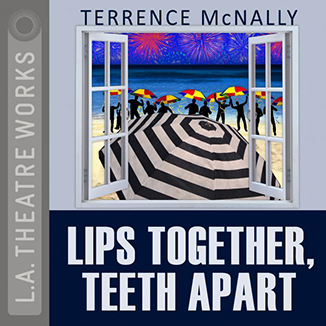 Take two heterosexual couples and surround them with gay vacationers at Fire Island on the Fourth of July. What could go wrong? Find out in playwright Terrence McNally’s masterful dark comedy which brings to life ghosts of the past as it lays bare secrets of the heart. If you love plays that walk a fine line between laugh-out-loud comedy and truth-telling drama, this one is for you!

Recorded in Los Angeles before a live audience at The James Bridges Theater, UCLA in December 2012.